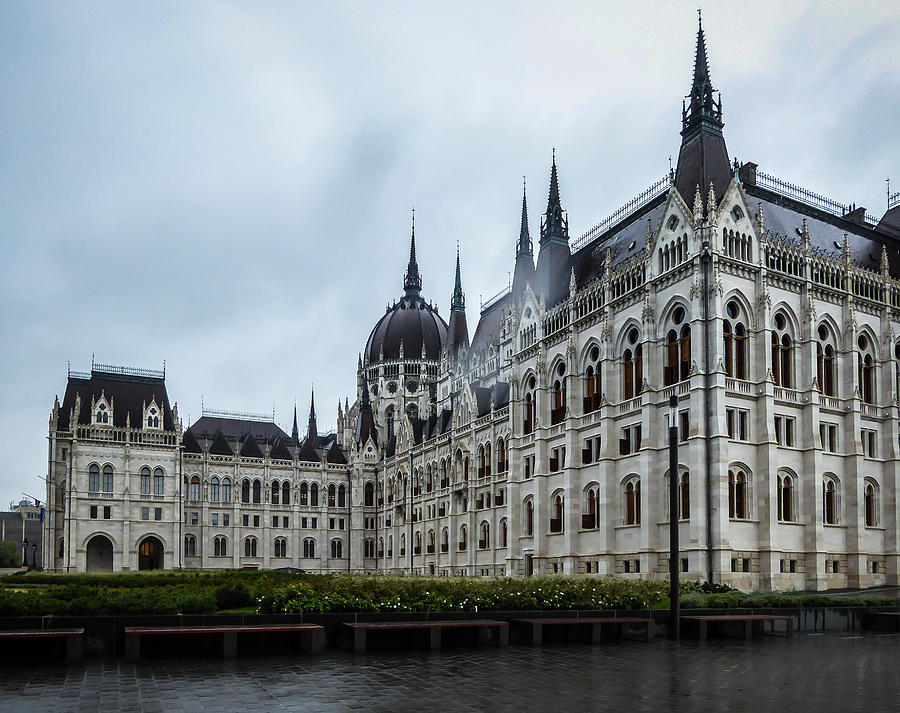 View of the Hungarian Parliament building in Budapest from the east side, near the entrance.

The Hungarian Parliament building was finished in 1904. It was built in the Gothic Revival style with a symmetrical facade and a central dome. The dome is Renaissance Revival architecture. The building is also symmetrical on the inside and has two identical parliament halls, only one is used by lawmakers, the other is for guided tours. It is 879 ft long and 404 ft wide, making it the third largest parliament building in the world. Its interior includes 10 courtyards, 13 passenger and freight elevators, 27 gates, 29 staircases and 691 rooms (including more than 200 offices). With a height of 315 ft (96 meters), it is one of the two tallest buildings in Budapest, along with Saint Stephen's Basilica. The number 96 is significant to the nation's millennium, 1896, and the conquest of the later Kingdom of Hungary in 896.

The main facade overlooks the Danube River, but the official main entrance is from the square on the east side of the building. Inside and outside, there are a total of 242 sculptures on the walls.

Hungarian Parliament Budapest was featured in the ABC Group - B is For Building Exterior.

Thank you for featuring Hungarian Parliament Budapest in the ABC Group - B is For Building Exterior!

This is absolutely lovely Pamela

Love this work. I was in Budapest in 2011 and had an amazing time. I didnt have my good camera with me because I was there for a card tournament, so my photos werent as good as would have hoped. Yours bring back great memories. Well done !

Karl - thank you for your comments. I thought that this building was amazing, with mammoth proportions, and the rainy day really brought out the features of the architecture.