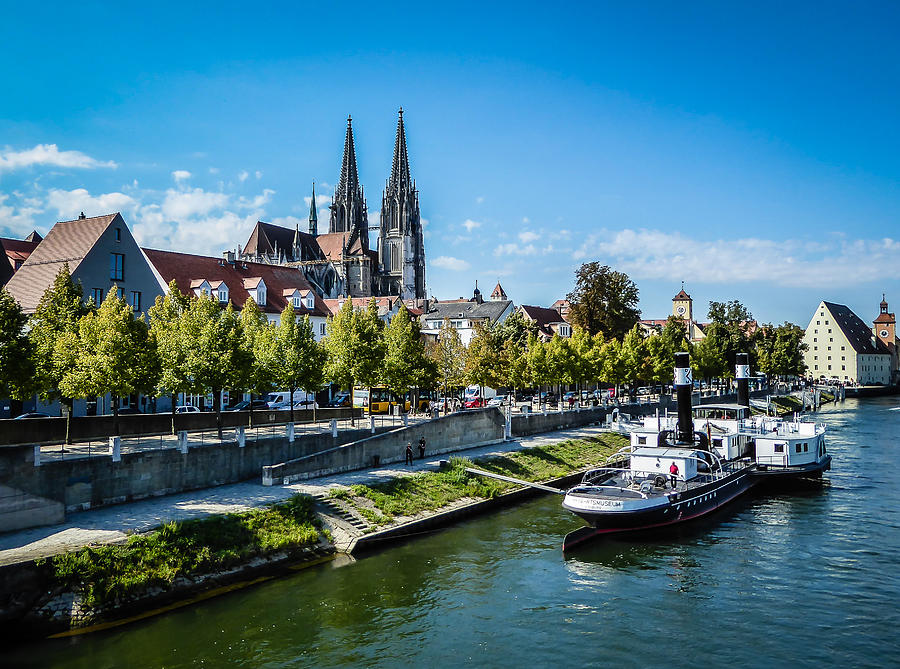 Old Regensburg, Germany, with a view of St. Peter's Church in the distance, and in the water is the Regensburg Museum of Danube Shipping (Donau-Schiffahrts-Museum Regensburg), a maritime museum of river shipping on the river Danube and other rivers,.

Regensburg is a city in south-east Germany, situated at the confluence of the Danube, Naab and Regen rivers. The city is the political, economic and cultural center of Eastern Bavaria. The medieval center of the city is a UNESCO World Heritage Site and a mark of the city's status as cultural center of southern Germany in the middle ages. The first settlements in Regensburg date from the Stone Age. The Celtic name Radasbona was the oldest given to a settlement near the present city. Around AD 90, the Romans built a fort there. The Regensburg Cathedral, St. Peter�s Church, is an example of German Gothic and is the main work of Gothic architecture in Bavaria. It was founded in 1275 and completed in 1634, with the exception of the towers, which were finished in 1869. Adjoining the cloisters are two chapels that are older than the cathedral itself, one of which goes back to the 8th century.

Beautiful cityscape! Looks like a cool area to visit!

Wonderful view of St. Peter's, the boats and the water. it's like a mini vacation for me to see your photos! :)) L/F